A Word About Extremism | The Life Writer Skip to main content

A Word About Extremism 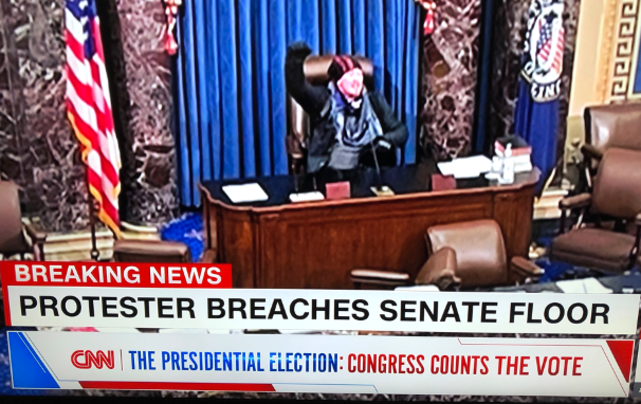 Like many of you, I watched the assault on the U.S. Capitol Building yesterday with shock and indignation.

Let's begin with a few definitions (compliments of thesaurus.com):

1. Extremism:  A tendency or disposition to go to extremes or an instance of going to extremes, especially in political matters: leftist extremism; the extremism of the Nazis.

An associated word is Bigotry.

2. Bigotry: Stubborn and complete intolerance of any creed, belief, or opinion that differs from one's own.

the actions, beliefs, prejudices, etc., of a bigot.

And last, the word intolerance.

3. Intolerance: Lack of tolerance; unwillingness or refusal to tolerate or respect opinions or beliefs contrary to one's own.

Unwillingness or refusal to tolerate or respect persons of a different social group, especially members of a minority group.

- - - It is patently obvious that after 2 months of detailed investigation and analysis, the 2020 Presidential election in the United States was conducted fairly and in a proper way, with no significant amount of voter fraud.

So, why did an angry mob storm and take over the Capitol during a joint session of Congress yesterday?

Because of the 3 definitions above.

That mob did not like the 2020 Presidential election result - which candidate Joe Biden won by 7+ million votes -  and they wanted to change the result illegally.

... So, when did the United States become such a bastion of extreme and intolerant behavior as we witnessed yesterday?

When I was in school, we were taught that the U.S. was a melting pot of people from all over the world, but with the same basic ideal: If you came here, and you worked hard + together, you could do anything and become anyone.

My high school soccer coach came from the country of Greece, and he told us that he heard the streets were paved with gold here when he was a boy in Greece.

He wanted to become a U.S. citizen so bad, that he joined the U.S. Air Force, to qualify for that distinction quickly.

He was a good man, a great coach, and an awesome American - and I feel lucky to have known him and played on his team.

There are many millions of Americans just like him - which makes the United States a very special and unique place.

We at The Life Writer, Ltd. condemn extremism, bigotry, and intolerance in the strongest possible terms.

... And I don't usually discuss religion or my own religious view much - especially online -  but I am going to today, in light of the attack we saw on the U.S. Capitol building yesterday.

I was raised as a Catholic (I was even an altar boy) but I strayed from that religion during college, and morphed my own belief into a hybrid blend of Christianity and Buddhism.

And because of that, no person or group (including sex, creed, religion, or race) is inherently any better - or worse - than any other.

And no one has the right to hurt or disenfranchise others either.

We all come here to do the best we can in this life.

And life - even if extremely challenging, frustrating, and unfair - is a divine gift itself.

I also believe that when we die, we will be judged by God for our effort and intention here, as well as for how we've helped others.

So, extremists, you might want to consider that possibility; that you will be judged by God and punished or rewarded appropriately for what you do in life.

It is in your own interest to not act in extreme ways.

We are all Americans, and we all have the same rights here.

I was happy to see President-elect Joe Biden come on the television yesterday during the crisis and deliver the thoughtful and reassuring message that he did.

The vast majority of Americans (95%) are just like him: Honest, fair, and hardworking people that just want to live and provide for their families properly.

It is amazing (truly) that the U.S. Congress was able to complete the 2020 Presidential Election certification process yesterday after that turmoil at the Capitol.

I was surprised and very impressed that they did.

On January 20th - 13 days from today -  a new United States President will be sworn into office.  Hopefully after that happens, the recent surge in extremism, bigotry, and intolerance will end, or at least be significantly reduced.

Because extremism has no place in this great country - and it should never be tolerated.