I saw this article on TODAY by Rachel Paula Abrahamson about Virginia 'Ginny' Burton, and wanted to share it because of how inspirational Ginny's story is (article link is below).

Ginny spent much of her life high on drugs, and in and out of jail. But she was able to eventually turn her life around, and she graduated recently from the University of Washington with a college degree.

Her recovery and her story is amazing.

Virginia “Ginny” Burton was 6 years old when she was introduced to marijuana by her drug-addicted mother. At the age of 12, she was using crystal meth. By 14, Burton, a student in an accelerated learning program, had dropped out of school and was smoking crack.

“I went from being a really sweet kid to an angry and aggressive one,” Burton, 48, told TODAY Health. “I didn’t want to be in a classroom. I just wanted to get high.”

Burton found herself bouncing from one juvenile detention facility to the next. By 2012, Burton, a mom of three, was homeless, addicted to heroin and had served multiple prison sentences. Her children were taken away.

“My kids would grab my ankles when I went into the kitchen because that’s where I smoked crack,” Burton revealed. “My life was a nightmare.”

But it's not anymore. 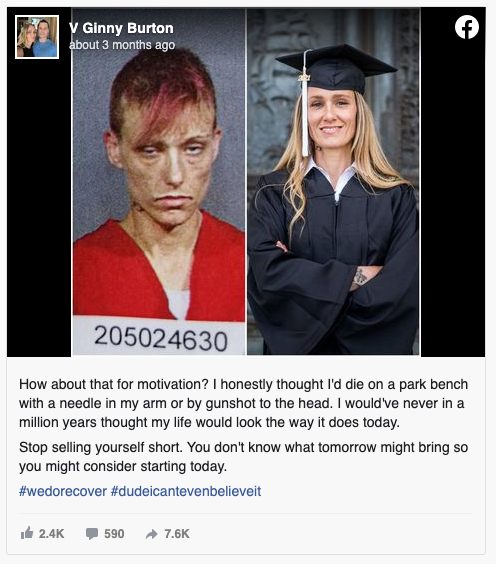 In May, Burton, who is more than eight years clean after getting sober while incarcerated, graduated from the University of Washington with a degree in political science.

Last month, Burton shared side-by-side photos of the milestone moment on Facebook. The picture on the left is a haunting mug shot taken in 2005, and the other shows Burton beaming in her cap and gown.

“How about that for motivation? I honestly thought I’d die on a park bench with a needle in my arm or by gunshot to the head. I never would’ve in a million years thought my life would look the way it does today,” Burton wrote. “Stop selling yourself short. You don’t know what tomorrow might bring so you might consider starting today.”

“I began crying as soon as the commencement program started,” Burton explained. “I’d let myself down for so long. I always felt people like me from broken homes don’t get to have good things. But we can." 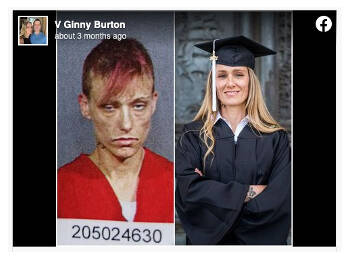