Because that's what life story writing does.

Many of you have probably seen the recent flyovers by the U.S. Air Force Thunderbirds and Navy Blue Angels flight demonstration teams, in support of the front line workers fighting the COVID-19 pandemic.

But, did you know that one of those pilots was female?

Michelle "Mace" Curran currently serves on the U.S. Air Force Thunderbird demonstration team as a pilot, the ONLY U.S. woman in that capacity.

... But Michele isn't just a pilot on that elite team.

She is also the LEAD SOLO pilot, one of the most demanding positions. 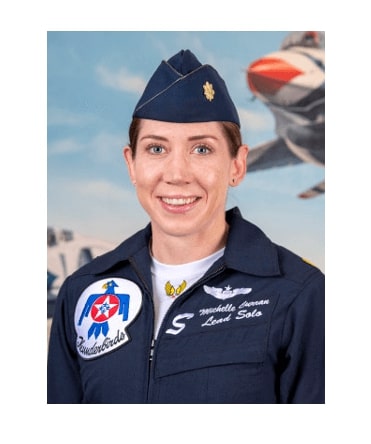 For those of you that do not know much about the Thunderbirds, here is a short summary (compliments of Wikipedia.org):

The USAF Air Demonstration Squadron ("Thunderbirds") is the air demonstration squadron of the  United States Air Force. The Thunderbirds are assigned to the 57th Wing and are based at Nellis Air Force Base, in Nevada. Created 67 years ago in 1953, the USAF Thunderbirds are the third-oldest formal flying aerobatic team (under the same name) in the world, after the French Air Force Patrouille de France formed in 1931 and the United States Navy Blue Angels formed in 1946.

The Thunderbirds Squadron tours the United States and much of the world, performing aerobatic formation and solo flying in specially marked aircraft. The squadron's name is taken from the legendary creature that appears in the mythologies of several indigenous North American cultures.

Officers serve a two-year assignment with the squadron, while enlisted personnel serve three to four years. As the squadron performs no more than 88 air demonstrations each year, replacements must be trained for about half of the team each year, in order to provide a constant mix of experience. Since 1953, they have flown in front of more than 300 million spectators.

1. Four F-16s flying together, in eight different formations. The Arrowhead formation is the tightest, with as little as 18 inches between the aircraft. Those four ship formations perform loops and rolls, and formation transitions. All maneuvers are performed at speeds of 450 to 500 mph.

2. Two Solo pilots demonstrate the performance capabilities of the F-16 airplane by doing aggressive maneuvers: High speed passes, slow passes, fast rolls, slow rolls, and tight turns. They typically operate at just under the speed of sound (500 to 700 mph) and some of their maneuvers include opposing passes and/or mirror formations (when two aircraft are flown back-to-back or opposite each other).

In mirror formations, one Thunderbird is inverted (upside down) and that aircraft is always #5: Michelle's airplane. The number 5 on her airplane is painted upside-down so that it appears right-side-up for the routine. Michelle's flight suit also has the number 5 sewn upside-down on it. 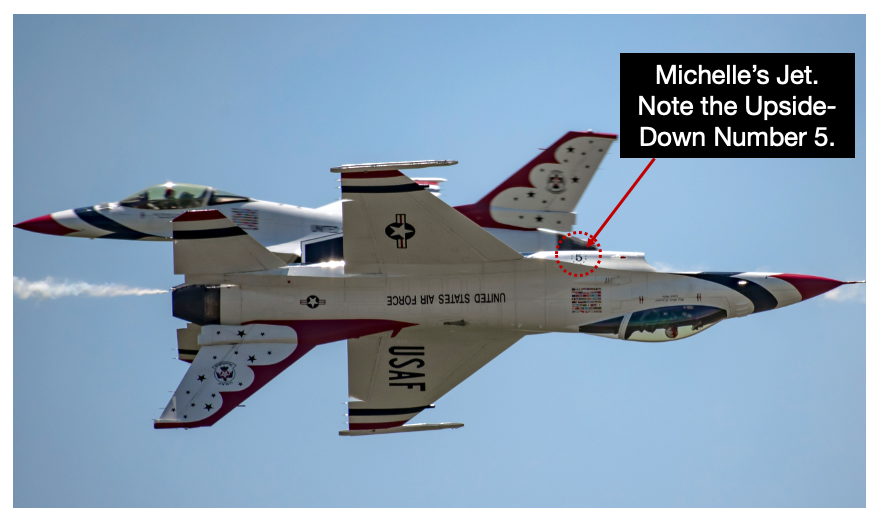 While Michelle is not the first female Thunderbird pilot (there was one in 2005 and 2007) she proves that women are just as capable as men are today, in fulfilling that extremely demanding high performance role.

In a CBS News interview (video link below) Michele said that: Regular people - like her - can do amazing things, if they just step outside of their comfort zone.

I've heard that myself also, from working with life story writers.

You are an inspiration to us all.

You don't have to be a fighter pilot.

The already love you and they want to learn more about you (as well as themselves).

Try out The Life Writer app today for free: https://www.thelifewriter.com/user/register

Here is a link to Michelle's CBS interview. It's really good. Check it out: 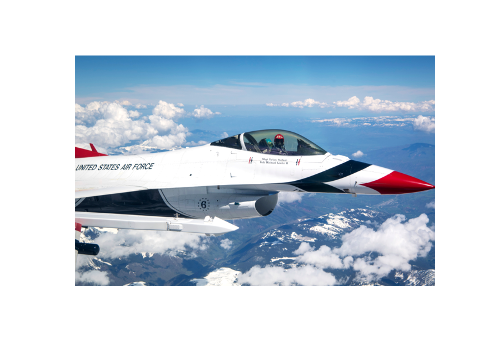