How and Why to Write a Memoir

I saw this article in the Catholic Sentinel by Katie Scott and Sarah Wolf (link below) and wanted to share it because they make some really good points.

Their article is titled (and shown below / bold emphasis mine):

‘Worth hearing and worth preserving’: There are many reasons and ways to document personal histories

If your life is an open book that’s a good thing — at least if that book preserves a personal history for future generations.

Such documentation passes along values, offers family members a deeper sense of self, gives history greater nuance, and puts current difficulties into context, said Linda Duman, a member of Our Lady of Lourdes Parish in Jordan and treasurer of the Oregon Catholic Historical Society.

“The present can seem tough, but when you talk to people about their past, you see that throughout history people have endured challenges,” said the 73-year-old. At the same time, “you can learn how much happiness there can be amid hardship.”

Both lessons have special relevance during the current pandemic, she said.

Duman recalled how when her kids were in high school, they interviewed their grandparents about World War II and the Great Depression.

Duman’s father was a former Marine who served at Iwo Jima, one of the bloodiest contests in the Pacific. Witnessing their grandfather’s emotions as he recalled details gave the teens a deeper understanding of the historical event and the contribution their grandfather made, said Duman. Listening to firsthand accounts of the Depression helped them grasp that “struggle doesn’t mean it’s all doomsday,” she said. “People were able to appreciate smaller things.”

When Judy Litchfield’s aunt and godmother Bernice Lorang mentioned that she had a diary from when she was training to be a nurse during the 1940s, Litchfield was eager to read it.

“I knew her as my aunt and godmother, but I didn’t know her as a person,” said Litchfield, a member at St. Ignatius Parish in Southeast Portland.

As Litchfield read the diary, she was introduced to the perceptions of that time and how people lived. She had long conversations with her aunt and eventually decided to publish the written reflections as a book, “Providence White Caps.”

Litchfield said her aunt’s story helps give her roots and guide her. She now is writing her own memoir to add one more tale to history.

Personal histories are important to write out, she added, otherwise they can be lost forever.

Bill Predeek’s family moved to Mount Angel in the 1890s and has lived there ever since. Some 20 years ago, Predeek made his family’s history a hobby. He’s talked to every family member, collecting pictures and stories.

“It’s those stories, beyond just the names and dates, that give you a feel for who you are,” said Predeek.

He recalls that his aunt, now 105 years old, told him a story from when she was 5 years old, in 1923. Her grandmother would tie up her horse and buggy at the church before she’d walk downtown. When Predeek asked why she didn’t just park downtown, his aunt said her grandmother didn’t like all the traffic. Predeek laughed recounting the tale.

A decade ago Predeek helped form the Mount Angel Historical Society. Members collect photos and stories from families. The accounts give a feel for the community, along with the ideas and the feelings of a time, said Predeek.

Other such documentations by Oregon individuals have become part of the Oregon Catholic Historical Society’s records. The society preserves the history of Catholic organizations and individuals in the state and publishes a newsletter on various topics twice yearly.

Beyond pen and ink.

There are numerous ways to preserve a personal history — from keeping a diary or typing a memoir to recording videos or saving files of notes. Newer story-documenting programs are another option. They offer online templates, ideas for questions, and professional interviewers and transcribers.

LifeBio, for example, edits and prints books with a loved one’s history and photos. StoryWorth helps family members come up with questions that are emailed to a loved one weekly. The company compiles the answers and prints them in a keepsake book.

There’s a considerable cost range for these services. It’s about $18 for a list of questions through StoryWorth. Modern Heirloom Books will offer six hours of interviews and an editing session and produce a book for a hefty $15,000.

If a family member opts to document the history of a loved one, Duman suggests more than one interview session. “The first time you get them thinking, and then later they’ll have more to add as they reminisce,” she said.

A pilot study led last year by the Ohio Department of Medicaid showed that reminiscing and storytelling can reduce older individuals’ loneliness and increase feelings of social connectedness and overall well-being.

Yet Duman notes sometimes people only want to talk about positive memories. “I don’t think we should hide the difficult parts,” she said, and with good humor shared a piece of her own family’s less-than perfect history.

The Donation Land Claim Act of 1850 meant white male citizens were granted 320 acres of federal land to cultivate in the Oregon territory. If they were married, the couple received an additional 320 acres. As a scheme to accumulate more land, Duman’s great-great grandfather had three wives and thus “three times the 640 acres,” said Duman with a chuckle. “That’s why the Neals are so prolific.”

Not everyone “has a completely stellar past,” she said. “But it’s not healthy to mask over things, and maybe there are lessons to learn from it.”

Ultimately, said Duman, “everybody’s story is worth hearing and worth preserving.”

The first thing I want to say about Katie and Sarah's article is: Why wasn't The Life Writer included in the writing options above? (LOL)

I will be writing to them to let them know I've blogged about their article, and I will also send them a copy of our HOW IT WORKS video.

- "Such documentation passes along values, offers family members a deeper sense of self, gives history greater nuance, and puts current difficulties into context."

That is SO true. We have seen that demonstrated repeatedly, and especially between the older and younger generations (grandparent and grandchild).

- “The present can seem tough, but when you talk to people about their past, you see that throughout history people have endured challenges,” said the 73-year-old. At the same time, “you can learn how much happiness there can be amid hardship.”

- "Listening to firsthand accounts of the Depression helped them grasp that “struggle doesn’t mean it’s all doomsday,” she said. “People were able to appreciate smaller things.”

There is absolutely no doubt about that.

I remember my High School Civics teacher saying once:  "...You know, as you get older, things get easier."

After you survive a few crises in life, later ones are easier to deal with.

... And If you want to act like an old geezer in those cases (I hope you don't) you can always use the infamous "Back in my day... (fill in the blank)" about how tough it was when we were young.

(Most of the younger folks today do not have it easier than we did).

- “I knew her as my aunt and godmother, but I didn’t know her as a person."

- “It’s those stories, beyond just the names and dates, that give you a feel for who you are."

- “I don’t think we should hide the difficult parts,” she said, and with good humor shared a piece of her own family’s less-than perfect history.

When you are a parent, you always try to set the best example for your kids (at least I did) which is good and bad in a way, I think.

Because, why you always want your kids to see you in the very best light, it might be okay for them to see you not so perfect also. I mean,  no one bats 1000 in life (does everything perfectly).

When it is time to write a story, very often the kids are grown, and you can let your Mr./Mrs. Perfect guard down a bit, and let everyone know who you really are and what you have done in life.

Life story writers typically WANT to do that: Be authentic and help others, by revealing who you are and what you have learned in life.

- “Everybody’s story is worth hearing and worth preserving.”

Being alive is a gift, and being able to share your story with others not only benefits you, but others as well.

Why don't YOU write and share your story with your family?

Try out The Life Writer App for free here: https://www.thelifewriter.com/user/register

Do you want to see how it works? Here is a short video (click the white arrow below):

‘Worth hearing and worth preserving’: There are many reasons and ways... 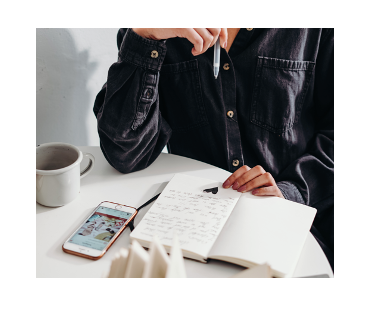