I saw this memoir book review in the New York Times by Dwight Garner and wanted to share it because it is a GREAT example of what a memoir can be.

It is About Georgetown University Basketball Coach John Thompson (article below / article link at page bottom):

“I’m six feet 10 inches tall,” the longtime Georgetown basketball coach John Thompson writes in his posthumously published autobiography. “I have a large mouth, a big head and a deep voice. I naturally make a big noise. Not only am I Black, but I have dark skin. My feet are big, my body is big. Sometimes I’m loud, but I’m loud because I’m composed of big things.”

Thompson, who died in August at 78, has left behind an unusually good sports memoir with an unusual title: “I Came as a Shadow.”

Though he grew up in the Washington, D.C., projects and his father never learned to read or write, Thompson had an uncle, Lewis Grandison Alexander, who was active in the Harlem Renaissance.

I came as a shadow,
I stand now a light;
The depth of my darkness
Transfigures your night.

This book is about Thompson’s own shadows, ones he was sorry to cast.

As a large, dark-skinned Black man coming of age in the 1950s and ’60s, he felt sorely underestimated — he sensed that white America instinctively considered him inelegant and unintellectual. Later, when he began to win as a college basketball coach, the nature of that shadow changed. Suddenly he was viewed as a fearsome intimidator and a bully, designations he deplored but learned to use because they gave him a competitive edge.

If you followed college basketball in the 1970s, ’80s and ’90s, you’re aware of the reputation of the Georgetown Hoyas. (The team won an NCAA championship in 1984.) They were thought to play rough. They were a team many loved to hate. “Bands in opposing arenas,” Thompson writes, “played the Darth Vader theme music when I walked by.”

People weren’t used to seeing a big Black man yell, or Black players who would not back down. When his star center Patrick Ewing retaliated after being consistently fouled, Thompson writes, “a whole bunch of people who never played the game saw a Black team defending itself and called us thugs.”

“We didn’t start any fights, but we knew how to end them” is a typical line in this book.

So is, in terms of Thompson’s potent political sensibilities, “I felt some of that Malcolm X bubbling up inside me.” Thompson was committed.

He paced the sidelines as if they were the ramparts at Elsinore. 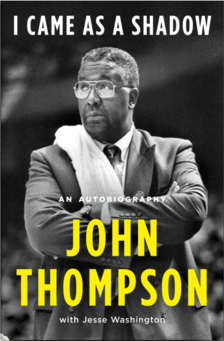 Auerbach helped lead him into coaching.

Thompson took over at Georgetown in 1972. The college had a poor team with a losing record. Thompson slowly turned it into a powerhouse. He did so by recruiting young Black players, some of whom had less than sterling academic credentials. He fought for these kids. He thought they deserved a chance.

He boycotted a game when the NCAA wanted to make it harder for poor kids, most of them Black, to receive athletic scholarships.

“We wouldn’t call it a school,” he writes, “if they came here perfect.” He was proud that nearly all of his players graduated. 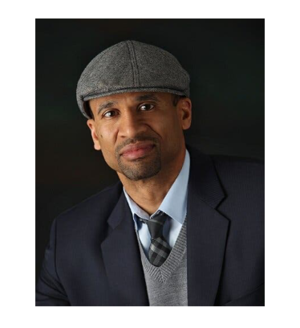 He’s pretty funny about his other motives. “I wasn’t trying to look deeper at a kid who couldn’t shoot, though,” he admits. “I didn’t offer the proper support to any slow, short guys.”

He was aware that, as a rare Black coach, he had to win quickly or be fired. He understood, as Sister Rosetta Tharpe sang, that 99 and a half would not do.

“I Came as a Shadow,” written with Jesse Washington, a writer for ESPN’s The Undefeated, is a consequential book with a plainspoken tone.

Even after his success, Thompson preferred McDonald’s to restaurants with white tablecloths, and his voice makes an authentic sound.

This book has its lacunae. His wife and children are rarely mentioned. He wished he’d spent more time with them. He gives little evidence of his life outside of basketball, but perhaps he didn’t have much of one. As he writes about Auerbach: “I distinctly remember Red being perplexed by his friends who took vacations.

His work ethic was so strong, he couldn’t understand the concept. ‘When they get there, what do they do?’ he said.”

Thompson was a serious gambler. He drops lines like, “One of my best friends in Vegas worked for Meyer Lansky.” You sense there are stories that await a biographer.

About Colin Kaepernick, he writes, “Some people try to translate Kaepernick’s protest as hating America, or they tell LeBron James to ‘shut up and dribble.’ Tell me, when do these people think it is appropriate to speak up?” He adds: “Never, that’s when.”

Thompson looks back on his life, and on the lives of his parents and those of Black people writ large and asks, “Did America do this consciously, subconsciously, intentionally, unintentionally?”

The basketball court was, mercifully, a meritocracy. On it, “I didn’t want to be equal to the white man,” Thompson writes. “I wanted to kick his ass.”

I am a white guy and not a great basketball player (although I did play for fun back in the day).

I remember Georgetown. They were TOUGH, and Coach Thompson would wear that big towel around his neck most - if not all - of the game!

(He did look big and imposing).

I really like this memoir because John gets the chance to tell his family, friends, and world what he thinks.

What he really thinks.

That is a powerful right that we all have as Americans.

... Okay, I admit it: I can relate to Coach Thompson's team of underdogs because of my own soccer playing experience back in high school.

I went to a city school and some people back then thought that busing was a good idea - so our high school had busing.

That meant that half of the student body was black, and the other half white.

Our soccer team didn't have much funding back then. We didn't even have warm-up uniforms - but we had a GREAT soccer coach (who hailed from Greece) and a very motley crew of players that played together as a TRUE TEAM.

We would go out into the suburbs and play the bigger, wealthier schools often.

And the results were typically - like John Thompson says - 'somebody getting their ass kicked.'

And it usually wasn't us.

Because we wanted it more.

I know what it's like to play with a chip on your shoulder - really, just to prove that you BELONG - like Coach Thompson's team did.

So, congratulations John Thompson for being such a great basketball coach and for telling your story, your way.

- - - Are YOU ready to tell YOUR story to your family (and maybe friends)?

You don't have to be a great basketball coach, or even famous at all.

Try out The Life Writer App for free here: https://www.thelifewriter.com/user/register

This video shows you how it works:

Do you need a gift certificate? This is what they look like: